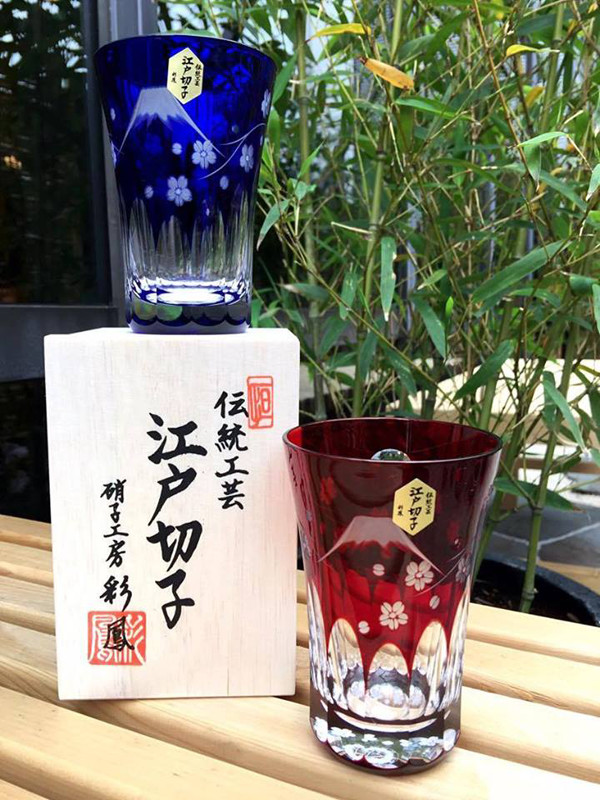 Edo Kiriko is a traditional Japanese glassware and also makes a great gift to offer to your family and friends when returning from Japan. It is said the first EDO KIRIKO was a carving on surface of glass using emery by the glassware craftsman, Kyubei Kagaya of Edo Odenmacho in 1834. In 1873 the Shinagawa Glass Factory (today, Kita Shinagawa 4-chome, Shinagawa-ku) was established, and an English glass-cutting expert, Emanuel Hauptmann, was invited as a glass-cutting advisor in 1881. Over ten Japanese craftsmen learned from him and this is when the traditional glassware craft technique still used to this day was developed.

The popularity of Kiriko began to grow around this period along with the progress of cutting techniques as well as the popularization of glassware. During the Taisho period (1912-1926), researches regarding glass materials used for cutting glass were conducted, while polishing techniques for crystal glass were developed, and this helped to further raise the quality of EDO KIRIKO. “Cut glass” rapidly developed to become a high-level craft and was the representation of glass crafts from the Taisho period to the early Showa period (1926-1989), which also became its first golden period.

Waridashi
Vertical and horizontal marks are placed as guidelines for the cuts to be made.

Arazuri
The glass is cut using a wet diamond wheel to decide the rough outline of the design.

Sanbangake
More detailed, smooth cuts are done base on the rough outline performed at the Arazuri stage.

Ishikake
Artificial whetstones and natural stones are processed while applying water, and the surface with cuts are made smoother.

Migaki
The cut surface is polished by applying dissolved abrasives on a rotating wooden disk or resin-type pad. There is another method where luster is given by soaking the glass in a chemical (acid polishing).

Bafugake
The glass is polished by applying dissolved cerium oxide as an abrasive onto the rotating disk such as felt and cotton.