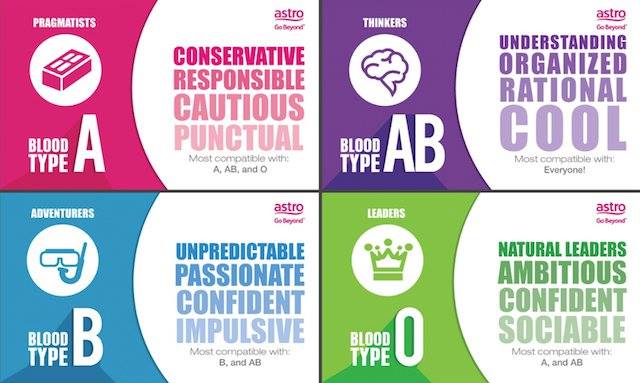 If you read manga or watch anime, you may have wondered why they always include the character’s blood type in their descriptions. Or maybe if you have Japanese friends, they may already have asked you which was yours.
Why does it matter?

There is in fact no real scientific evidence but some researchers believe that blood types are associated with personality traits.

In 1927, Takeji Furukawa published a paper called “The Study of Temperament Through Blood Type”, which was then used by the Japanese militarist gouvernment until World War II.The theory lost interest in the 1930’s but was revived by a book written by Masahiko Nomi in the 1970’s.

Nowadays, you can find blood type horoscopes published in magazines and newspapers or shown on TV. According to a recent survey, more than half of Japanese people like to talk about blood type and personality, and they also like blood-typical personality diagnosis.Some people choose their partners based on blood type, and even recruiters can discriminate candidates based on it ! Be prepared !